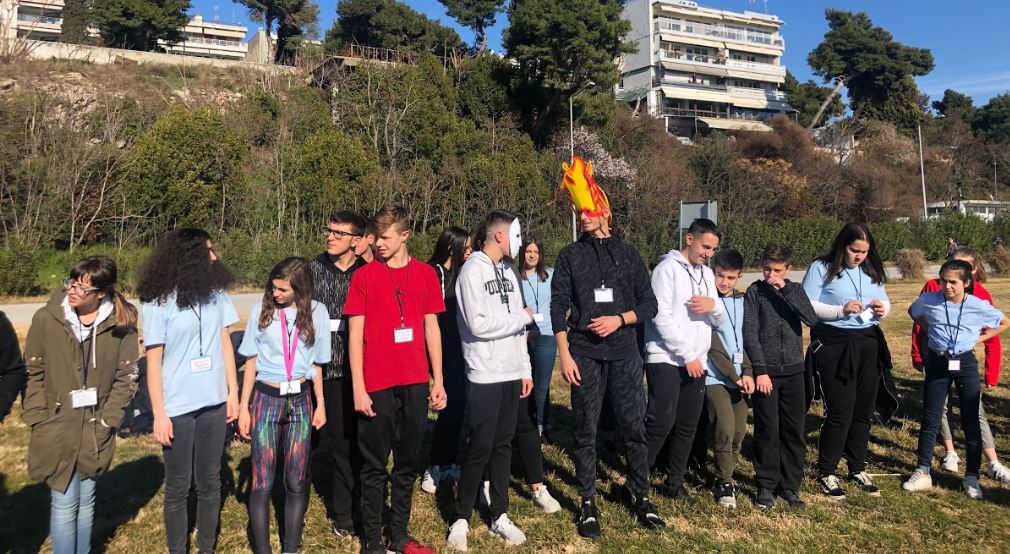 “Living in my city, I am slowing down to 'read' the past in my everyday city life”

Do I really know what surrounds me in my city? Have I really perceived its streets, neighbourhoods, buildings and monuments as I passed them in a hurry? What if I slow down, have a better look, use all my senses, search for the old and the new, try to collect information, interview the elderly and gain from their wisdom and experiences..., so that everyone can feel my city through my own perspective?

This was the topic of the project meeting in Thessaloniki, Greece. Lots of different activities were designed by the Greek Erasmus+ work group and carried out by all participants, while wearing their “Slowing down in Thessaloniki” T-shirts and carrying their “Slowing down back-packs on their shoulders, which both were offered as presents to them. The activities are described in brief as follows:

The Outdoor Activities helped all participants to understand what “Slowing down to 'read' your city” means by collecting information or things from the nature, by recording the sentiments and scents of the city. During the historical walk in the city centre, by means of a home-made map and the given tasks on the attractions of Thessaloniki, the participants discovered the hidden stories of landmarks and monuments, noticed details, gave emphasis on using all their senses, learnt about the Greek customs, habits, music, dances and the Mediterranean nutrition, studied specific geographical features. Another exciting experience was the excursion to the Royal Tombs of Macedon in Aigai, Vergina, where all searched for more hidden myths behind the historical facts.

At the Digital Workshop, the pupils turned their collected data into a a “Slowing-down   Photo Album” by using ICT.

During the Music Workshop, teachers and students enriched their knowledge about the Greek music and dances by watching a power-point on them. Afterwards, they wrote lyrics in their own language to create a common 'Slowing-down' song, which was heard at times during the week. They were also taught and trained how to dance traditional Greek dances.

At the Workshop of Scents, the pupils learnt a lot about various herbs, olives and the olive  oil, the bees' wax; in practice, they produced a hypericum perforatum oil and a cerate from olive oil and bees' wax.

The Art Workshop offered them the knowledge of how to design and make kites as well as theatre masks like in ancient times, reviving thus an old tradition.

The activities were guided by the teachers, whose subjects are relevant to each  of them, and the Greek students too, who, after intensive work, were well-prepared to lead the workshops on their own.

All workshops were designed by taking into consideration that innovative, creative and non-formal methods should be introduced and used.

In these meetings, the participants learnt how to apply useful 'slowing-down' techniques at school and in everyday life, which helped them to mount up their self-confidence and creativity. Very impressive was their involvement and cooperation in totally mixed groups and how much they tried to diminish their shyness. Extraordinary was also their positive, continuous interaction through the English language, and how they managed to eliminate the differences among them by focusing on their similarities.

During the Greek week, a great number of pupils, teachers, families and local authorities were involved, who were given the chance to exchange views, develop their arguments and express their worries and anxieties, acts that encouraged and promoted the pupils' critical and creative thinking. They all seized the opportunity to learn about different cultures and customs, to make new friends. At the certificate ceremony, Greek parents, the school community and the local authorities met each other, relaxed over delicious home-made meals and wine or soft drinks, talked, evaluate the meeting, admired the exhibited workshop products, got closer to each other.

A huge “Thank you” to all, students, teachers, parents, sponsors and local authorities, for their great effort, positive attitude and their open mind and, of course,  to Erasmus+ for the unique opportunity, offered to us to work out such a programme.

NOTE: After our meeting in Thessaloniki, Greece, all partners uploaded their own “Top 10, Slowing-down-City-Rules”. The most frequent ones will be chosen to form the project “Decalogue of Slowing-down in our city”.

The European Commission support for the production of this publication does not constitute an endorsement of the contents which reflects the views only of the authors, and the Commission cannot be held responsi­ble for any use which may be made of the information contained therein.